Direct from the gates of Valhalla, Highland Park has unveiled the last in the series of stunning whiskies that celebrates its Norse heritage. ODIN, named for the King of Asgard himself, joins Thor, Loki and the beautiful Freya to complete Highland Park’s Valhalla Collection.

Legend has it that Odin, All-father of the gods and ruler of Asgard, is an intensely complex character. Known as ‘the furious one’, Odin is the strongest of all the Norse gods and driven by an unquenchable thirst for wisdom. By sacrificing an eye for a drink from the Well of Wisdom, he earned immeasurable knowledge and insight. With only one eye which blazes like the sun, Odin cuts an ominous figure.

Creating a single malt to reflect the dominant characteristics of Odin was no easy feat but the Highland Park whisky makers have excelled. This whisky strikes a balance between the god and the distillery’s signature Orcadian style – Highland Park’s sweet and gentle smoky peat aromas. The result is an undeniably powerful 16 year old single malt.

Gerry Tosh, Global Marketing Manager, says: “Odin, like its namesake, is an intense, powerful and complex whisky. Bottled at 55.8% ABV, it certainly lives up to the legend, a bold single malt higher in strength than Thor, Loki and Freya. In Odin, we have been able to add the final flourish to the Valhalla Collection, a stunning series of remarkable whiskies that offer affordability and exclusive collectability.”

“Now that Odin has joined the ranks of the other gods in the Valhalla Collection, the first chapter in this series is complete. However, the Norse legends of old may still offer us future intrigues.”

Nose: This intense whisky possesses a fierce spice. Cinnamon bark and nutmeg rise from Odin’s spirit. Behind the spice, toasted walnuts smoulder with pulsating explosions of smoke. Odin cuts an ominous figure and this whisky is no different.

Finish: Throughout is a subtle sweetness, sharing the knowledge of well-seasoned sherry wines. Plums and soft fruit disappear into the dark as the peaty embers glow into a smoky finale.

Odin will be available from specialist independent whisky retailers, at the Highland Park distillery and http://www.highlandpark.co.uk at an RRP of £180. 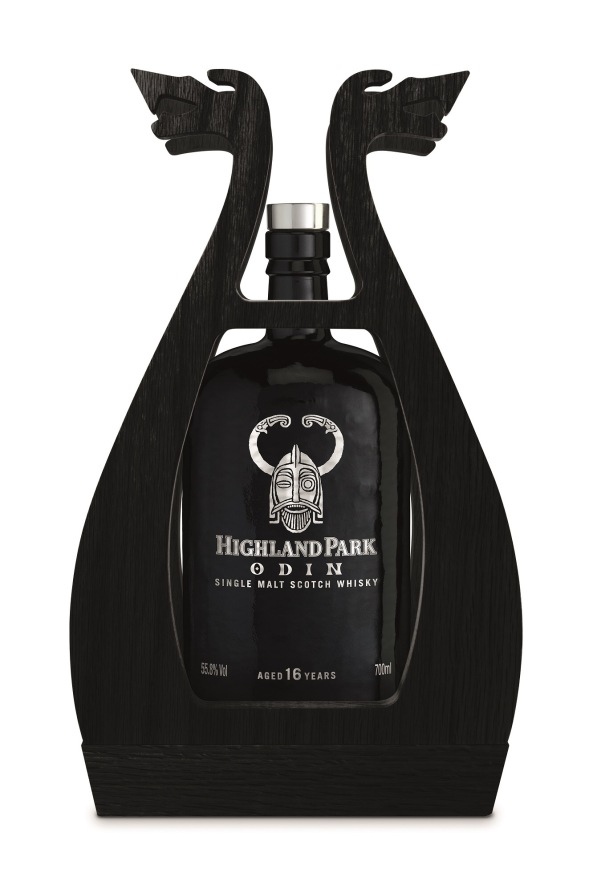 Waxy orange pith. Lots of vanilla. Cinnamon. Winter spices. Apple. Candied fruits. The name of the whisky is very apt, because it is very much reminding me of a scented candle. There is also a touch of smoke and wood char which would go with the snuffed element of that name! Time in the glass releases more fruits, pineapple cubes, touches of cola, a little more pepper, wax polish and some delicate oak.

Sweet, waxy arrival, tropical fruits, pineapple, mango, apple, some candied orange peel. The development gives a little pepper spice bite, evolving into more fruit layers with some spicy interactions, more orange, vanilla, a touch of clove all the time very waxy and fulfilling in the mouthfeel. There is a smoky element to the development, wood smoke and charred oak.

The fruit and spices stick around for a medium length finish, drying out slowly with touches of oak char at the very end.

Only a few drops added as this is very drinkable at the bottled strength. Wow. The water has unleashed extra fruity layering. The fruits are far more vibrant now, with the dried and sugared pineapple chunks taking centre stage, wax, orange, apple, pears are also amongst the mix. Lots of sugar. Pepper. Sweet liquorice. Sweet cinnamon, almost Cinnabun cream. Vanilla cream. Bloody lovely. The palate reflects this, fruit juices exploding in the mouth, with some spicy backing making the whole event bigger. The development has some drier elements now, and the finish is slightly drier, and it works very well. Definitely a dram to add a few drops to.

Fruity, juicy, with some complex spicy waxy candied fruit, I would say aged very well, feeling older than its actual years. Very tasty, easy drinker which I could happily sip all night long.

Much thanks to Wemyss for providing me with a review sample.

Vanilla and coconut cream! Coconut flesh, milk, shell. The whole thing. Buttery popcorn, which gets richer the more air that the dram gets. Lots of custard. Some pepper and nutmeg. Quite the egg custard tart going on. Including some fresh shortcrust pastry. Lots of fresh pastries. Sugary marshmallow, reminds me of snowball cakes. Some light milk, borderline white chocolate. Touches of oak dust. But all about the sweet confectionary.

Very long. Continuing the theme. Sweet. Lots of coconut cream, vanilla, sweet, peppery spices and chocolate. This is confectionary paradise. A lovely gentle chest warming shows the age through and gives a feelgood factor and a grin!

Only a couple drops. Conscious of age and the fact I’m loving it as it is! Things are more saccharine sweet. The nose has a touch more dusty spice with an increase in the coconut intensity. The palate also has more of a coconut intensity to it, with some of the more subtle complexities simplified into the coconut forefront. The finish again, sweeter, slightly shorter with more of a meringue note. Personally I feel water lessens the complexities and I would not dilute this one.

A lovely example of an older grain whisky. Showing that grain whisky can be great when properly matured. I love the confectionary sweetness, I would say it is one of the sweetest whiskies I have tried, and I have a sweet tooth! So it’s right up my alley!

Much thanks to Wemyss for providing me with a review sample.