No added colouring (Assumption based on light colour) 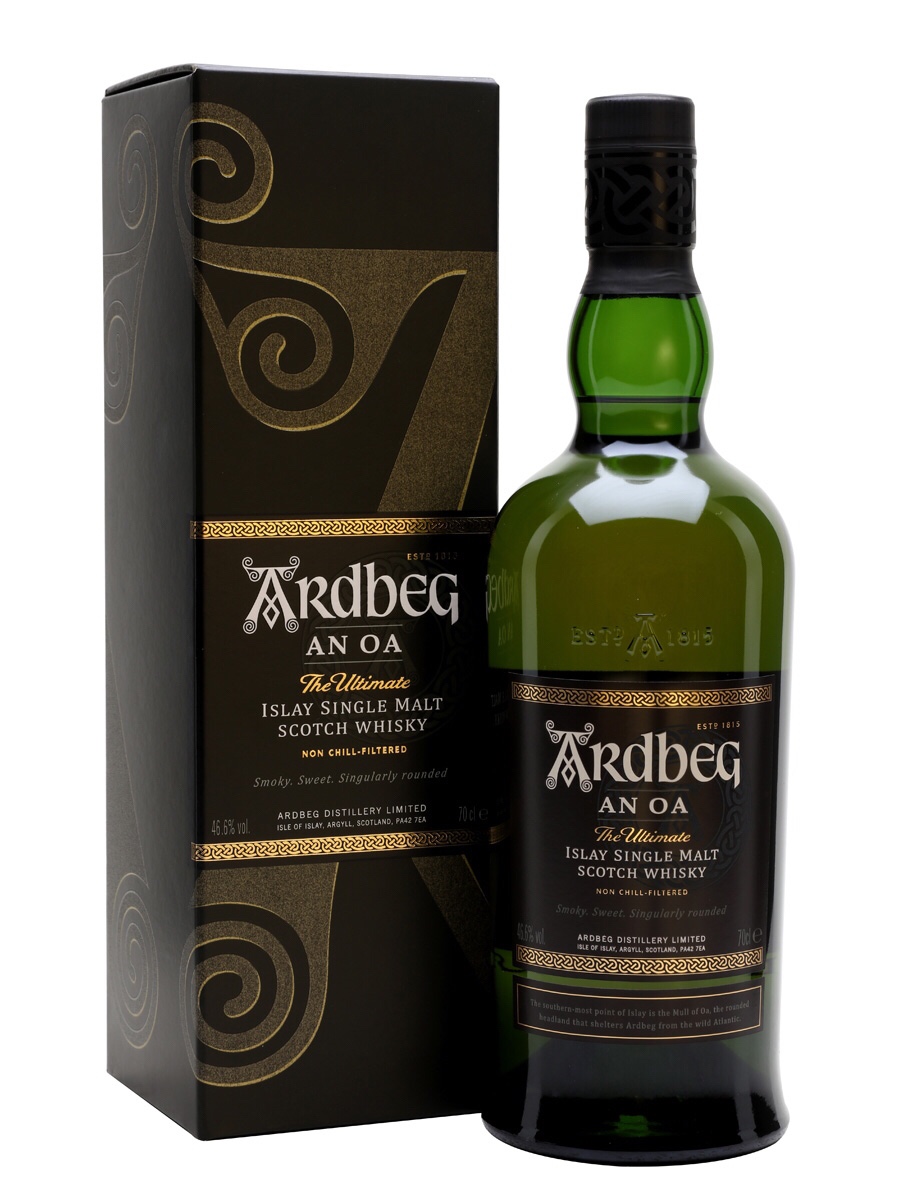 The few new release from Ardbeg into its core range in a very long time. No gossip on if it’s a take over for the 10 year old but it’s safe to assume it isn’t. The 10 year old is such an amazing dram there would be riots if it was going (probably). I’m a great fan of the 10 year old and the Uigeadail, can’t quite remember Corryvreckan, I think I need an excuse to open all three and do a parallel at some point.

Oa is a fictional planet that lies at the center of the DC Comics universe. Since its inception, Oa has been the planetary citadel of the Guardians of the Universe and the headquarters of the Green Lantern Corps. Unfortunately it has zero to do with this whisky’s name, but Ardbeg An Oa name comes from the Mull of Oa.

From the press release

At the heart of Ardbeg’s Distillery, in its intriguing new Gathering Room*, a smoky, sweet and rounded single malt is taking shape. Ardbeg An Oa (pronounced “an oh”) is inspired by the most untamed part of The Ultimate Islay Malt’s remote Scottish island home. Released in September 2017, it will be the first new permanent expression to emerge from Ardbeg for almost ten years.

Like the complex whisky which shares its name, Islay’s Mull of Oa is noticeably rounded. At the Island’s southernmost point, the headland’s towering cliffs stand defiantly against the raging Atlantic storms, providing welcome shelter for Islay’s south coast, to which the Ardbeg Distillery has clung for more than 200 years. Ardbeg An Oa pays homage to its untamed provenance, with contrasts of powerful intensity and sweet silkiness that celebrate the spot where storm meets calm.

Inside Ardbeg Distillery’s new and bespoke Gathering Room lies the vast Gathering Vat – specially created from French oak to bring Ardbeg An Oa into being. The different layers of whisky slowly mellow together within; the richness of spirit matured in Pedro Ximénes casks, the spice of whisky aged in virgin oak, and all the hallmark intensity of Ardbeg matured in ex-bourbon barrels. Culminating in an untamed single malt far more complex and rounded than the sum of its parts.

So, it sounds a bit like another recent release, lots of varied maturation. I don’t know what to make of that, proof of the pudding is in the sipping though so let’s crack on.

It’s Ardbeg. 😋 A lovely dry lemon soot on first sniff. Background of vanilla cream. Some maltiness. But mainly it’s the fresh crisp smokey lemon juice that I come to expect. A little time in the glass later. It’s a little juicier, with the lemons and now a touch of orange. The smoke is ashy and intense, like a coal burner in the rain. There is some maritime influences coming through, some wet rope, tar and salty shellfish. It’s good.

Intense sweet and sour arrival of lemons, ash, pepper and vanilla. Quite a smokey blast. It’s very chewable stuff, flavour intensive and a sensory experience. I can’t sense much in the way of the sherry cask maturation in this, so I can only assume there either isn’t a lot in the vatting, or the casks were many times used. There’s a fair bit of runny honey sweetness in the development, still smokey intense, a lovely oiliness demanding to be chewed and swallowed. This is a very moreish drop. A little more time and things get richer, this is an evolving whisky, needs time and patience. The sherry casks are starting to come through now, giving an enhanced level of richness and depths to the sweetness. This is very good.

There’s a touch of toffee in the finish (there’s the sherry?), sweet vanilla, a rich smokiness, some dry lemon peel with the fading pinch of pepper. It’s quite a long finish considering the perceived youth of this expression.

A small splash added. The nose is slightly dirtier now. More earth, and even a little farmy. The palate has lost some of the lovely oils but has some more complex lemon intensity, less spice and smoke though. The finish has some herbal spice amongst the ashy finish. I like this with and without water, for the more intense, richer experience though I prefer it undiluted. Just.

This is surprisingly great. I don’t mean to be completely surprised, but Ardbeg has a stonker of a core 10 year old whisky. Which is just brilliance. So any addition to the range is going to be met with some scepticism. This removes those doubts. This is a great whisky. Well constructed and bloody tasty with all the hallmarks of Ardbeg. For me the 10 year old is still gospel. But I wouldn’t have a moments hesitation in getting An Oa to have as an alternative, more youthful, but very richly flavoured Ardbeg experience.

Thanks to Ardbeg for the official review sample.