I’m a big fan of Glendronach and especially their cask strength release. I’ve always had a lot of fun with it in the past. This release looks a little lighter to previous releases, but is still promised to be filled with Oloroso and Pedro Ximinez flavours aplenty.

On first pour there is a rich nutty dryness, quite treacle bound. After 15 mins in the glass there is quite a youthful nature coming through, it’s sweet, very nutty, has a fair dollop of honey richness. The dried fruit is quite light, it’s not a sherry bomb at all like previous releases, a lot more subtle. There’s a charred oak, and slight earthiness in there as well. Edging more towards an ex-Oloroso profile rather than PX.

Oh, that’s easy going for 57%+. Lots of sweetness, a great creamy thick mouthfeel, lots more sherried on the palate, but again not massive, an assertive flavour, but not too much. So, sweet honey and dry nutty arrival, turning thick and gloopy in the mouthfeel with honey richness into the development. Layers of toffee and fudge throughout and touches of dried fruits, raisin, cherry and some red berries. Subsequent sips over time are easier and easier with a more juicy cherry fruit richness and touches of cola.

Quite short to medium in duration, there’s the dried fruits sticking around, mainly cherry rich and a touch of raisin, some dry treacle remaining with the pecan/walnuts sticking through to the very end.

Adding a splash of water. The nose is a touch lighter and has a fruitier aspect now, the fruit leads over the drier nuttiness now. The palate is also a lot fruitier, more juicy by far. The fruits are fresher, juicier, lots of cherry, cola, a touch of orange peel, more light sherry, very flavourful. Most definitely one to experiment with the addition of water.

Significantly different to previous batches but still fundamentally Glendronach cask strength. This is a well constructed, extremely drinkable whisky. It’s got a lot going for it and a definite bang for your buck in this day and age of ever increasing prices of cask strength sherried drams. Highly recommended.

Thanks to Glendronach for the official review sample.

The new Old Pulteney Fleet have docked! This is what you need to know. 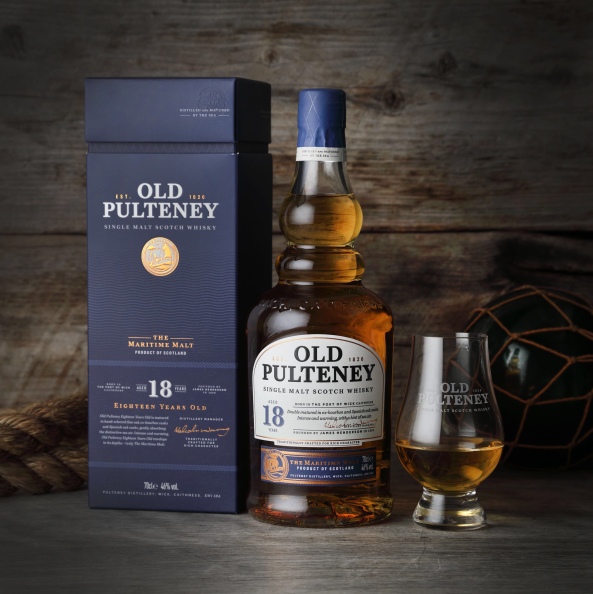 Available at The Whisky Exchange now!

It’s been a while since I bought a bottle of anything and just immediately opened it the same day. This Islay #3 from the Boutique-y Whisky Company was just too damn compelling to wait though. It’s young for sure, but it’s colour says some active cask interaction has occurred. It’s label suggests to me it’s a Laphroaig (it’s a guess, never a certainty), and I’ve had some great young Laphroaig’s in the past year or so, so it was strictly a no brainer.

From first pour there is a lovely dry ashy bonfire in the glass. Caramel sweet, smoky butterscotch, but with a herbal heather smoulder and a honey dew melon squeezed over the top. There are touches of sweetened lemon in the background, overall a great depth to the nose, with its earthy herbal sweet complexities.

The aftermath of a menthol cigarette and some good well done barbecued meats. And a fair dollop of honey rich dipping sauce. Need more sips please.

Added a few drops, but I think it’s at its optimal drinking strength. The nose is smokier and more bruising to the senses now, drier and ashier, bellowing smoke. The palate, lighter, sweeter, a little more peat and simpler sugars, the finish ashier and drier. I prefer this at bottle strength, but it’s worth trying with a little water if you like the cleaner sweetness, I prefer things a little more dirty complex.

Absolutely bloody lovely. Great Islay expression, it ticks all the boxes, plus it’s extremely drinkable in a dangerously more-ish way. Love it. Glad I jumped in, this bottle won’t last long at all. Consider buying 2! I did. 😉

There’s a tiny distillery full of wondrous whisky dreams in the making. The next crowdfunding phase of development will be underway on Monday the 6th of August. These guys know what they are doing when it comes to constructing some seriously craft single malt (and other spirits) and are well worth keeping an eye on and investing in. Details below.

A pair of brothers who had previously helped to establish one of the world’s leading whisky bars and who recently launched their own gin and whisky distillery are already eyeing expansion due to the popularity of their new spirits.

Phil and Simon Thompson, who run the hugely successful whisky bar in the Dornoch Castle Hotel, constructed a distillery on site in 2016 following a successful initial crowdfunding round which saw 250 whisky lovers from all over the world invest in a bid to secure hotly anticipated casks of new make spirit from the new distillery.

After a busy, but remarkably successful 2017, which has seen the laying down of future whisky stocks and the global launch of the Thompson Brother’s Organic Highland Gin, the brothers have this week announced a second crowdfunding bid in order to secure the distillery’s long-term future at a new local site.

The pair plan to move to an old slaters yard just up the road in Dornoch in order to expand their whisky production capacity and meet the growing demand for their gin, which is now sold in eleven export markets around the globe including Japan, Australia, Singapore, Taiwan, Italy and Germany.

Co-founder and director Phil Thompson explained that the level of demand for their products was “humbling” and that the plans to expand would better help them to keep their growing customer base satisfied, he said: “We never anticipated just how much demand there would be, not only for casks of our whisky, but for our Organic Highland Gin as well. The expansion means we can meet that demand while still maintaining our ruthless dedication to old-style production methods and quality levels.”

This new round of crowdfunding is set for launch at the end of July with work on the new site scheduled to begin in October 2018, and once completed will enable Dornoch Distillery to meet the demand and consolidate its presence in its existing export markets and allow it to expand further afield into new markets in 2019.

The move will entail an expansion of production capacity, a new retail space and tasting room and new jobs for the local Dornoch community. Not to mention up to 250 new private casks of Dornoch new make spirit for those fortunate enough to get in on this second round of crowdfunding.

The crowdfunding will be launched on our website (www.dornochdistillery.com) Monday 6th August at 10:00am GMT.

The Thompsons stated that their vocal support of, and dedication to, traditional whisky production techniques, which has gained growing popularity amongst whisky enthusiasts, will remain at the heart of everything they do.

Co-founder and director Simon Thompson explained: “Scotch Whisky tasted notably different in the 1960s and earlier, before mass modernisation of the equipment and ingredients. The demand for this older style – more focused on distillate character, mouthfeel and tropical fruits – is massive these days.

“No one else is making this style of whisky anymore so we wanted to really push the envelope and see if we could create a whisky which harks back to these extinct Scotch Whisky characteristics.”

This dedication to creating quality spirits also extends to their Organic Highland Gin, as, unlike the majority of gins made today, a significant proportion of the Thompson’s signature gin is made using spirit distilled in-house.

The resulting malt-heavy style gives a richer, more characterful gin which is gaining popularity around the world and the brothers believe is putting Dornoch “on the map as a Highland distilling town”.

The 12yo sold Pulteney is a stable dram in the Scotch and Sci-Fi headquarters pairing very well with any Star Trek that maybe on at that time. (Easy going and good quality!). There’s a new fleet coming forward. Information is still under wraps at the moment but I’m sure all will be revealed in good time. In the meantime there’s a competition that they are running. See the below press release and click to enter. 😊 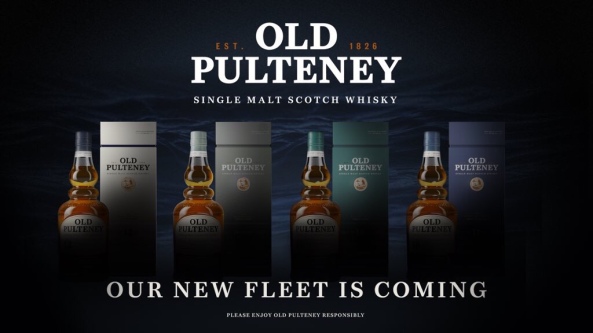 On the north east shores of Scotland, where the invigorating North Sea winds meet the stunning Caithness coast, there is a town; home to a vibrant single malt whisky which captures the very essence of its location.

This is Wick and we are Old Pulteney.

Never one to rest on our laurels; we are always evolving. Inspired by the spirit of our forefathers, and in celebration of our home town and its lively maritime history; we have crafted a brand new fleet. A collection of whiskies grounded in the passion and vigour shown by those who have truly shaped our spirit.

Our new collection of single malt Scotch whiskies remains true to the renowned, classic style of Old Pulteney celebrating our lively history, yet bringing some different flavours to the fore. Created from the unique combination of brisk salty sea air and meticulous cask selection, we continue to truly be the maritime malt.

Distilled and matured by the sea, this new fleet will take you on a journey of flavour, combining a consistent reminder of our coastal home with the influence of oak casks, from which our spirit is nurtured and shaped.

Ahead of the official unveiling of the new collection of whiskies, we are giving our fans the chance to be one of the first to hold one of our new fleet in their hands.

For your chance to be one of the first to own a bottle from our new collection, simply visit www.oldpulteney.com/competition